Does any American car define the era of classic muscle cars and pony cars better than the Ford Mustang? However you might answer that question, it’s impossible to deny the contribution made by Ford to automotive culture and development. The Mustang has a long history going back to the 1960s. One especially iconic version in the first-generation Mustang models is that of the 1967 Mustang. 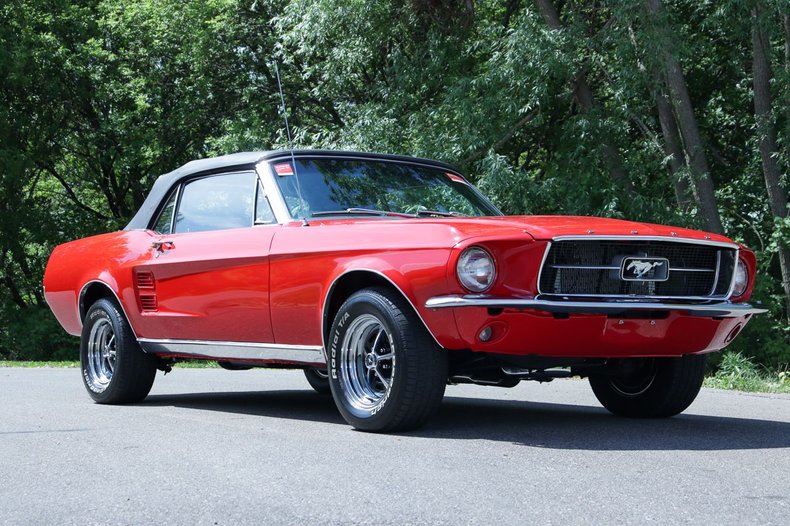 The first generation Ford Mustang was first launched in 1964 and had a fairly long production run up to 1973. The second generation was created for the 1974 model year. The 1967 Mustang model holds a special place within this generation because it was the first significant facelift and redesign of the model since it was first launched. It's common to see either generation at most classic car musuems.

Designs for the upgraded models were actually underway even as the first 1964-1965 models were flying out of showrooms and this new Ford model was finding success. That might seem strange, but the Mustang designers Ross Humphries and Don Kopka were emboldened to try and make the Mustang a larger vehicle for when the redesign year finally came.

Making the Mustang bigger was something that legendary Ford executive Lee Iacocca was apparently opposed to. Nonetheless, Iacocca eventually approved and personally oversaw the design and development process of the mid-generation facelifted Ford Mustang. 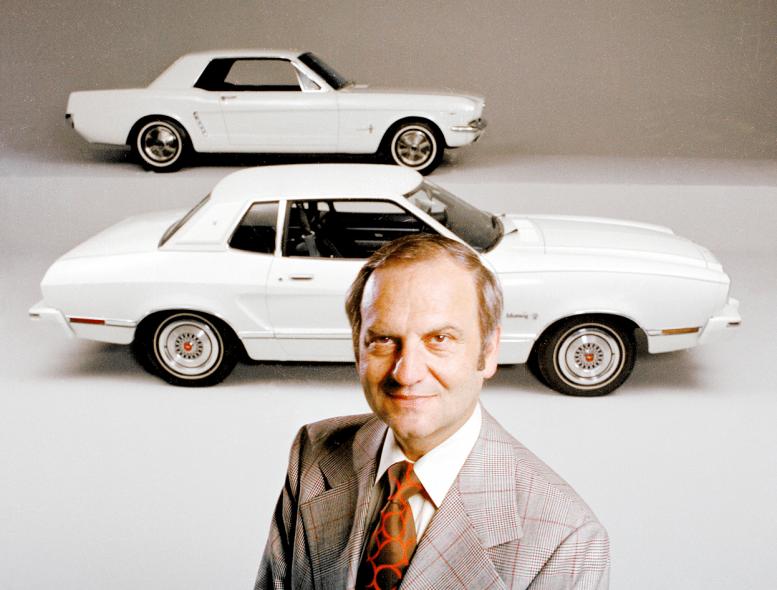 Changes were numerous, starting with increasing the space for an all-new set of available big-block V8 engines. This came with a general increase in the dimensions of the vehicle, making it about 2 inches longer and wider. The wheelbase remained the same as the previous version, however. You will see this particular mustang on many best classic cars of all time lists.

The interior was also changed to remove the embossed horse emblem from the seats and replacing it with a more premium-feel interior package with different color options. Brushed aluminum was used for the dash trim, or woodgrain if you preferred the more classic look, and new door panels were added.

Some standard and optional features were also juggled around. The air conditioning was built right into the dash, and the previous “deluxe” steering wheel became an option. The 1967 model hadn’t yet received 3-point lap and shoulder seat belts, but it did get them in the 1968 version, which was part of the same overall facelifted line. It did get upgraded stereo speakers, and the Rally-Pac was removed and replaced with a newly designed instrument cluster with optional tachometer and clock.

On the exterior, the 1967 Mustang received concave tail lights, a side scoop, square rear-view mirrors, new wheels and a new gas cap. The facelifted model carried on into 1968 as well, when it received additional chrome detailing on the outside. Most people will be suprised to learn about the lower cost of this supringly affordable classic car. 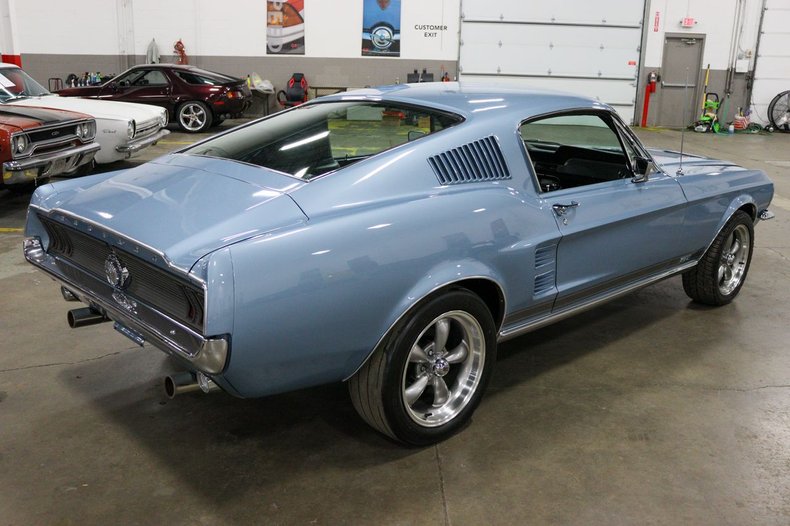 We’ve mentioned some of the features in the design section above, but it’s important to also understand the powertrain and altered specifications that helped to set this model apart from the original. The 1967 Mustang was available as a 2-door hardtop, 2-door fastback, or a 2-door convertible. The various model options are very commonly available to clients looking for old Mustangs for sale.

The 1967 model included the original 200 cubic-inch (3.3L) Thriftpower inline6- engine, as well as the 289 cubic-inch (4.7L) Windsor V8 engine. Larger models were added, namely the 390 cubic-inch (6.4L) FE V8 engine, which came from the Ford Thunderbird and was fitted with a four-barrel carburetor.

Even larger engines arrived in 1968 in the form of a 428 cubic-inch (7.0L) Cobra Jet engine outputting a massive 335-hp. As a classic car dealer, we often see these engines still within the classic Mustangs that we have sold in the past. That model was actually classed as a “drag racer for the street.”

Even though the 1967 Mustang was the first year in which greater weight and size were added to the vehicle, it was still lighter than some of its successors, even within the first generation of Mustang models. That being the case, the lighter body designs and more nimble and agile looks of the 1967 model make it all the more special.

A Special Place in History

The facelifted 1967-1968 Ford Mustang holds a special place in the Mustang’s long model history because it was the car that was featured in Steve McQueen’s 1968 film “Bullitt.” McQueen’s Mustang in the film was a 1968 GT model 2+2 Fastback depicted in a chasing rivalry with a Dodge Charger on the streets of San Francisco. 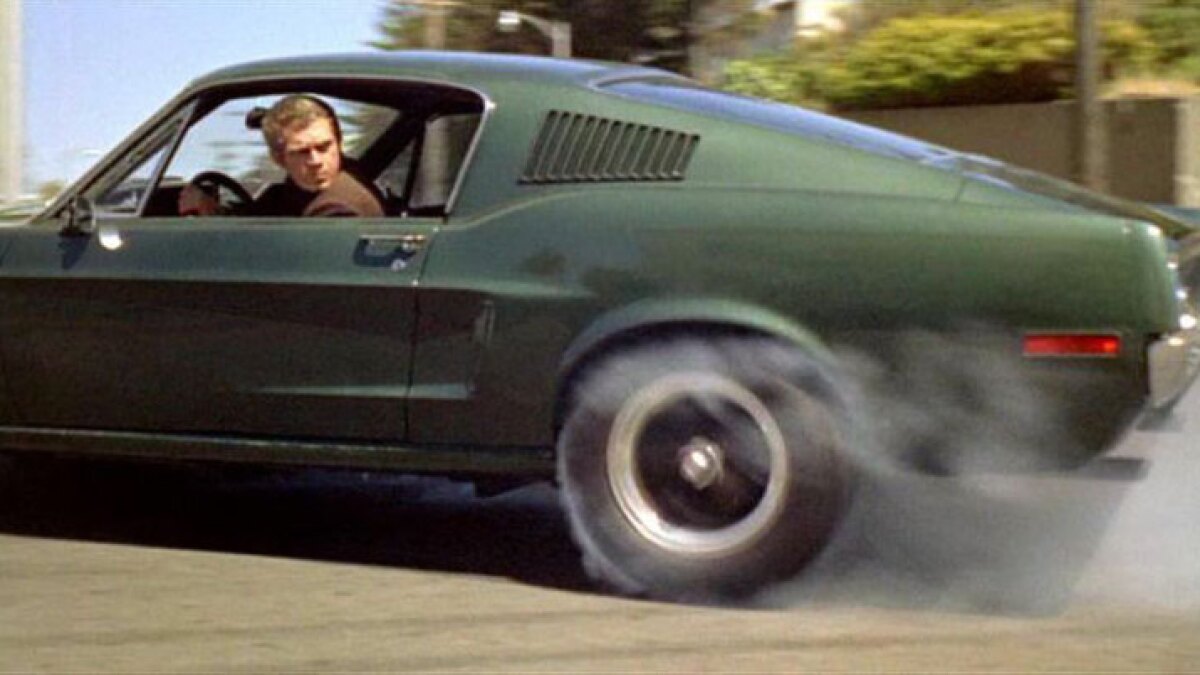 A special Bullitt Edition of the Ford Mustang was released in 2020 with the same white cue-ball topper on the gear shift and additional design and power cues that were reminiscent of the “Bullitt” car.

The actual Mustang from Bullitt was sold at a classic car auction in January 2020 for a very tidy sum of $3.7 million dollars, a record at the time.